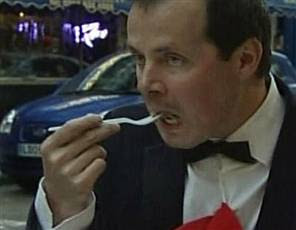 Walsh in protest of protest.
Following a recent protest by Mark McGowan whereby the 'performance artist' ate a piece of corgi dog (the Queens favorite dog breed) to protest the Royal Family's treatment of a fox, Walsh, presidential candidate and faux meat devourer has said she will break with her vegetarian ways and munch on a piece of human flesh.
"I will. It'll be tough but I plan to break into the Palace and chew on a bit of the Queen's arm or Prince Phillips' - if the Queen is not available. I mean I think that's a better way to make a point than eating a bit of dog. I know the dog died in a breeders; he didn't actually kill it but I still think its not making quite the same point that all animals feel pain - a fox, a dog etc. But my taking a tasty chunk of "Queenmeat" I could send a strong message that hunting is wrong. What do you think? Mind you, the Queen looks like a tough old bird. I'd say I'd have to have a few Alka Seltzer afterwards. Mmm.."
# posted by Fiona @ 4:32 PM