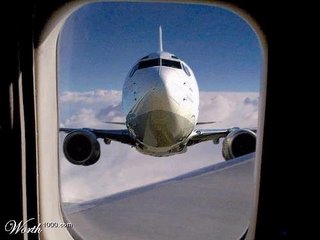 I love Photoshop!
So says Bush ouster Fiona Walsh. "The myriad functions of the cut and paste button bring a warm smile to my face. Who can forget the leaping shark attacking the helicopter doing the internet circuit these many years? Or the fake pictures of Elvis (well I think they're fake!) filling his tank at the gas station? Hilarious. I really admire those folks at Adobe for their ingenious software that allows us to create shots like the airplane flying directly at you through the window. That'd would make you choke on your pretzel now wouldn't it!"

Walsh to be Guest Judge on new reality TV show!
Presidential candidate and slacker Fiona Walsh has landed a job as a judge on a new reality show. "Yes indeed, it's called "Flower-Arranging with Celebrities". I will be 'the tough one' affecting a British accent and slamming their arrangements every week. The lowest scores or the one with the "least amount of petals" will be eliminated. Each week, a seasoned floral arranger (probably a Jason or a Clint) will be paired with a celebrity (for instance, Flava Flav). They will be asked to design an arrangement suitable for say, a wedding, a funeral or a house party. Afterwards points or "petals" will be awarded depending on how good or rubbish they are. I will contribute sage comments like "Ooh love, your rosebuds are completely withered", all while throwing my eyes to heaven and sneering. Audiences will love it. I expect to be slammed with hate mail and have eggs thrown at me on the street because of my viciousness on the telly (but I'm covered because I have a dry-cleaning clause written into my contract). It will be hilarious and fun. And... the best bit is, I get to keep the flower arrangements every week! Now who could want a better job!" At time of writing, no network cable or major knew anything about "Flower Arranging with Celebrities".

Walsh offers MJ a job!
Fiona Walsh, presidential wannabe has offered Michael Jackson a job! "I have an offer out to him. I heard he was a bit strapped for cash and was thinking of going to work for a Saudi company developing theme parks and the like. While I've no doubt that's right up his alley, I was disappointed to hear he was leaving U.S soil - he's a national treasure. So I called up his people and asked if he'd like to come work for me. I can't say exactly what's going on as we're in the middle of negotiations but I believe he's mulling over the offer." Nudged for details on the nature of the work Mr. Jackson would be doing, Walsh replied "Dance lessons! Yes he'll be giving me dance lessons, private one on one tutoring. I've wanted to be able to do the moonwalk for years and almost have it down but with Michael's coaching I'll be dancing up a storm in no time. And if he wants to give me a hand around the house, dusting and hoovering, sure I won't say no. I imagine he'll be quite the entertainer. I'm a huge fan and thrilled at the thought of inviting him into my home. Of course I don't have any small children so there'll be no danger to anyone". Jackson's camp would not return any phone calls.