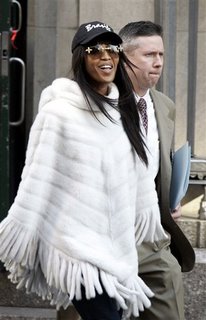 Walsh proves a point!
Following the recent charge against Naomi Campbell for allegedly hitting her housekeeper in the head with a phone, presidential candidate and devoted wife went on to prove a point. "The point is that people who abuse animals also abuse people. Look at Naomi! She thinks nothing about wearing the skins of animals mutilated and tortured for their fur and seemingly also thinks nothing of cracking her housekeeper on the head with a phone. Coincidence? I think not!". Naomi would not return phone calls but was said to be swearing loudly and flinging things, including phones around her swanky Park Ave apartment.

(courtesy of AlanBates.com and imdb.com)

Another startling prediction!
Fiona Walsh, unemployed and uninspired, presidential candidate has claimed she's found the perfect person to play Alan Bates the deceased actor, in the event of TV or film biopic. "Yes indeed. I think I have definitely discovered a hidden talent at spotting the similarities between people. Willie Wonka (aka Gene Wilder) and Nick Cage ("Adaptation"), Jeff Conaway and Keith Richards and now... Alan Bates and... Eric Roberts!". Subjected to a brutal interrogation about how she arrived at his startling conclusion, Walsh said "I saw Eric Roberts on "The L Word" and I was struck by how similar he looked to Alan Bates. Just physically - especially as he has put on a bit of weight - it suits him though. But I really hope Eric can do a British accent - I'd say he'll have no problem. And sure his sister Julia can give him a few pointers especially as she was in the Britflick "Closer" with delicious scamp Jude Law". Exhausted from all the name dropping, Walsh nodded off mid -interview.

Walsh is being sued....by Dan Brown
Author and staunch Catholic, Dan Brown is suing presidential candidate and lapsed Catholic, Fiona Walsh. "It's true", said Walsh. In a shocking expose/undercover/document which Journalingo has managed to acquire via a "friend/close personal source", Brown claims that Walsh stole several ideas from his book "The DaVinci Code" to write her own "Holy Grail/Harlequin" like novel, set in biblical times. Walsh would only say "Due to the fact that this is completely untrue, salacious, tittle-tattling and that Mr. Brown's or should I say "Jesus" suit has no merit, I will not be commenting on this nugget of gossip at all. Suffice to say Brown needs to get a life and stop suing me". Brown when contacted claimed to be completely unaware of any such suit save for the suit he's being sued for himlself regarding the Mona Lisa. Or something like that.