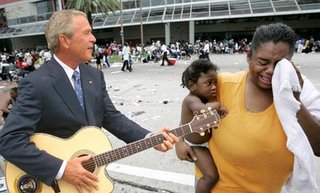 Frey just following in Bush's footsteps!
James Frey whose memoir/autobiography/work of fiction has been outed by Oprah Winfrey as a pretendy style book is only following in the footsteps of our President. So says presidential candidate Fiona Walsh. "Sure it's as plain as the nose on my face. Bush blatantly lied to us about Iraq, weapons of destruction, torture; important stuff. And when the President sets that kind of example, sure isn't it only natural that the rest of us may follow suit? Frey saw nothing wrong with making up stories about his drug addiction and dental work. He probably reckoned, if Bush can do it so can I. What I'd like to see now would be Oprah interrogating Mr. Bush and asking the same questions about his lying as she did to Frey. And of course I'd relish having the audience boo him. I think Bush needs a good booing - get him off his high horse. And peg a few rotten eggs at him as well, would be no harm!"
(Photo courtesy of Fark.com)

Walsh maybe moving to Bahrain!
Presidential candidate and heavy snorer Fiona Walsh is considering moving to Bahrain. Sources close to the tempestuous temp says she may be following on the heels of Michael Jackson and heading for foreign parts. "Haven't you heard, Bahrain and Dubai are the new Monte Carlo and Mullingar. It's the "in" place to visit with many ex-pats and celebrities taking up residence there. Plus with Bush and the Republicans turning the U.S into a semi-Taliban like regime (Alito, banning gay marriage and Pat Robertsons ould carry-on, what's Bush going to do next measure the length of our skirts?) I'm confident I'll feel right at home. I'm already one step ahead in that I'm married to a Muslim so I'll be able to slip on my hijab with no bother and I have a smattering of Arabic so shopping will be no problem". Asked how she intended to pursue her presidential candidacy from overseas, the tottie pondered "Hmm. God now I hadn't thought about that. I expect I'll be able to stay in touch via email etc and sure I can run a virtual campaign. With George Bush already phoning in his presidency, there's no reason I can't do likewise. Plus I'll have flacks and spin doctors turning my trip to Bahrain into a "life-saving, defending our freedom-type mercy mission" - it's brilliant!".
Bush is rumored to welcome Ms. Walsh's imminent immigration.