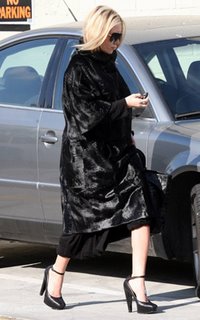 (photo courtesy of Star magazine)
What the f***?
So says Walsh, presidential candidate and alarmed animal advocate.
Walsh who decries fur wearing and loves all soft furry things said she doesn't understand why Ashley Olsen insists on covering herself with the fur of dead animals. "It's a well-known fact" said the testy temp, "that when you're anorexic the body grows a soft fur-like down all over called lanugo in order to keep warm. It's a natural phenomenon caused by starvation. So in effect she's wearing fur over fur - which not only is a waste of an animals life but is in fact a total fashion faux pas! Shame on you Ashley!"
Olsens plethora of suitors could not be reached for comment but one source did say that Olsen "is not at all cuddly".