I've decided Liz Taylor should pay....
"For my health insurance!" So says gubernatorial candidate and drunken delight, Fiona Walsh. "Ms. Taylor said 'I've decided everyone should go shark diving'. Well that's all fine and dandy but who's going to pay for my visit to the ear doctor when my ears won't clear after a 40 foot dive? Or when a shark takes a nibble from my meaty rear? Will she pay for the restorative surgery? Begob if she will, I'll take her up on her offer to dive with sharks but until then it's a no go. I'll still wear her "White Diamonds" fragrance though. I love it! I'm a big fan of its gardenia top notes". 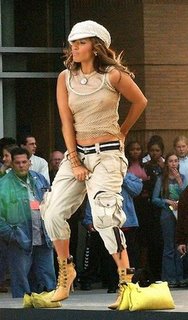 Burning question
Walsh, gubernatorial and presidential candidate and retainer wearer, said she has been curious about something for some time now. "Where is "Jenny from the Block"? I haven't seen her in ages. She's gone very low profile lately. I miss her romping around bedecked in jewels in trashed out areas of the Bronx. I also miss seeing her ex, Ben Affleck patting her nicely rounded behind. It was very soothing to know, that she was still "Jenny from the Block" and I'd like her to be aware that I for one was not fooled by the rocks that she got. I used to be from a block (or street corner more correctly) and now I've risen high within the ranks of the American political system but I can still fall off a bar stool when I go home to Roscrea with the best of them. I'm still down with my homies".