Walsh "not thin enough"
So say many of her close personal friends. "I've heard the rumors and I'm beginning now to believe that I'm not thin enough to have any kind of quality of life. I used to be really thin. I had anorexia and bulimia and survived on apples and gulps of air. Ah the good old days when calories were burned aplenty! Now however I'm in chubby no man's land. I'm plump in certain seated positions. And my friends are concerned for me. They know that I can expect no good to come from any kind of weight gain". Walsh who would not disclose her current weight but describes herself as "average" is said to be in the doldrums about her exercise regime. "I'm just not bothered. I'd like to run and run but the cold weather precludes me from any exercise except raising a pint. But the good news is... I just saved a bunch of money on my car insurance by switching to Geico!" We tried to get more information from Walsh but she was lost in a fit of the giggles. 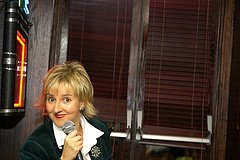 Courtesy of "Chicks and Giggles"

# posted by Fiona @ 7:38 AM
Richie "too thin" to locate.
Fiona Walsh, nervous person and presidential candidate has commented on Nicole Richie's broken engagement. "She's too thin to find - she's disappeared and that's why her fella broke off the engagement. I mean the poor girl is a bag of bones. If she turned sideways she'd go missing. That must be a torment for DJ AM. She's so skinny, she just goes missing all the time. It's impossible to keep a relationship going with that kind of behavior." Walsh pressed on. "You'd never have that problem with me. I'm nice and plump. Stout, you might say especially in certain seated positions. No fear of losing me. It's the main reason I eat so much. I'd hate to have people looking for me all day long."

Pitt adopts Walsh!
Fiona Walsh, campaigner and ditzy unemployed person has been adopted by Brad Pitt! "Yes it's true. My new name will be Fiona Walsh-Pitt. I will be join the expanding Pitt clan and I can only say I'm delighted!". Walsh who's real name is Fiona Mary Majella Walsh is the third adopted child of Pitt. "My mammy and daddy were a biteen upset when I told them I was going to be Pitt's new daughter but at the same time, they know I love the glitz and glamor of Hollywood and as Pitts' adopted child, I will be provided with lots of same!". Tickled for further thoughts on the question of whether Angelina Jolie will be her new adoptive mother, Walsh would only say "I'll have to wait and see about that. She's a nice lady and I'm sure we'd have great times. But I don't want to be roped into to babysitting and the like, it would be too much for my nerves at the moment. And I've heard that Maddox is a handful. Plus I really don't like children all that much - I prefer puppies and small furry kittens". Neither Jolie nor Pitt would comment on the implied lunancy of Walsh's (or Walsh-Pitt's) statements.